21Bty in the Falklands War 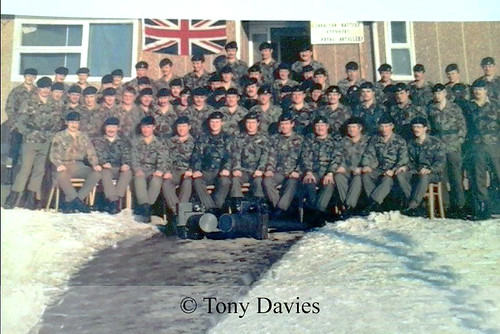 The Falklands Conflict- Operation Corporate, under a cloak of secrecy the 63 men of 21 Battery deployed from Lippstadt with restricted numbers, making command and control difficult. Flying from Gutersloh on air force 727 to the Ascension Island where they first deployed on the Channel Ferry St Edmund, here they discovered their first problem, where were their missiles which had been placed under Naval command.

Upon being reunited with their equipment the decision was taken to deploy the Battery across the other ships within the convoy en-route to the war zone, this was no easy task…

“The first major obstacle for those of us that joined the Tor Caledonia, a roll on roll off cargo ship carrying vehicles and equipment was boarding with all your personnel equipment onto the rear ramp with a 15ft swell from a small boat was no easy task, you would wait till the rise of the swell and jump ship, how nobody ended up in the sea was a bit of a mystery.”

Accommodation was tight to say the least, one section ended up in the ships’ sauna with just their green maggots for bedding, with many of the men being seasick almost everyday. The journey down was an experience in itself, with storm force seas, forty foot swells and also having to cope with stag duty on the bridge wings. Command decisions were fascicle aboard the ships, with overall command held by the captain of each ship, on one of them the captain was so over cautious that he insisted that those on ‘bubble watch’ had to hand over the working parts of their SLRs to prevent accidents..!

Arriving at the war zone the whole the situation for the Battery did not improve, with their resources spread over numerous ships with different command structures it was becoming a nightmare to make decisions for deployment. Brigadier Wilson refused deployment into Bluff Cove, ‘In my opinion the air threat is insufficient to warrant your deployment’, although the Navy had released 12 units.

Eventually air defence proved to be required, with a section or two being deployed above San Carlos Water. This in itself was again not as straight forward; the men had to hike to the top each morning with full kit plus the Blowpipe Missiles, then return to base camp for the night. Eventually the decision was made to place a more permanent operating position, with sandbags and a container being airlifted in for storage of the equipment.

Now covering a permanent position did allow for a more grouped approach to air defence, with 21 Bty deploying in their own defensive role, however ‘comms’ issues became apparent with providing power for battery charging; another job detailed to some of ‘the Battery was that of working with the Pioneer Corp and the removal the bodies from Ajax to the San Carlos settlement.

One section led by ‘Yogi’ Denton was deployed to help with the recapture of the South Sandwich Islands, which involved the surrender of the Southern Thule Garrison at the Corbeta Urguay base, before declaring hostilities over. 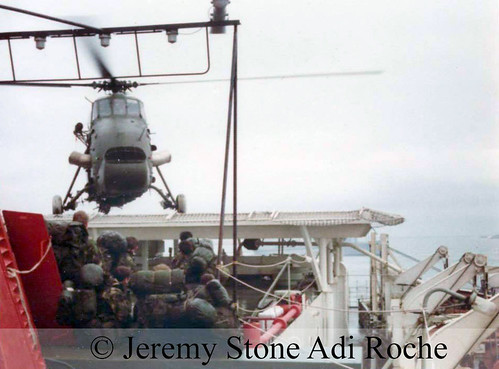 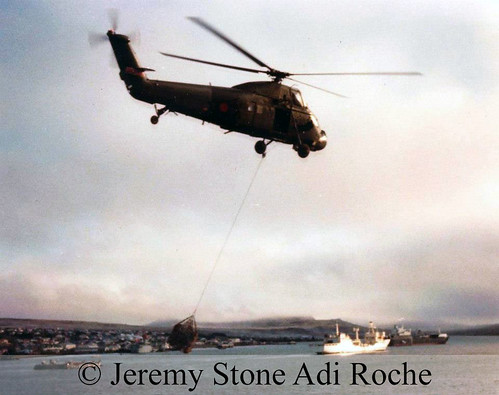 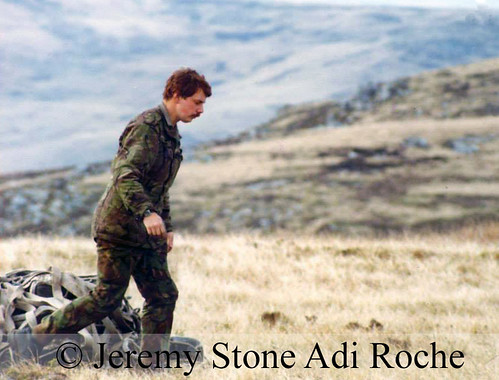 After capitulation the Battery starting coming back together, with new accommodation that being the old school house in Port Stanley, with the Battery being assigned air defence of Government House, which had now become HQ for land forces and, as the inner (unarmed) guard for the Argentine special category prisoners. It was common knowledge that the Argentine Officers were at risk from the conscripts, so segregation was a major issue, and for personal protection the Argentine Officers were allowed to carry side arms.

“Our job in Stanley was air defence of Government house which had become HQ for the land forces. Another of our jobs was to look after POWs that were being repatriated, this entailed strip searching and putting them through disinfectant showers, then try to ensure conscripts and enlisted were segregated, the higher ranking officers including General Menéndez were placed in cabins.” 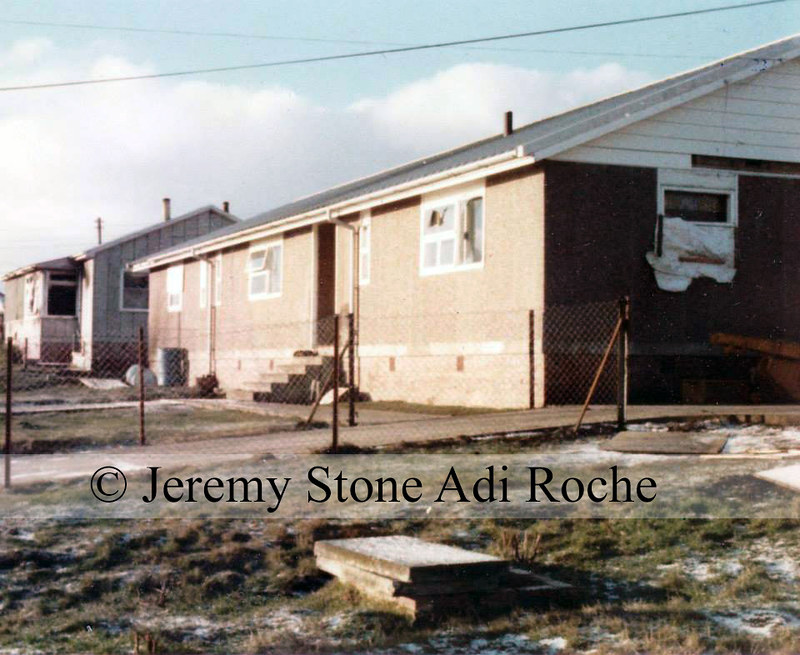 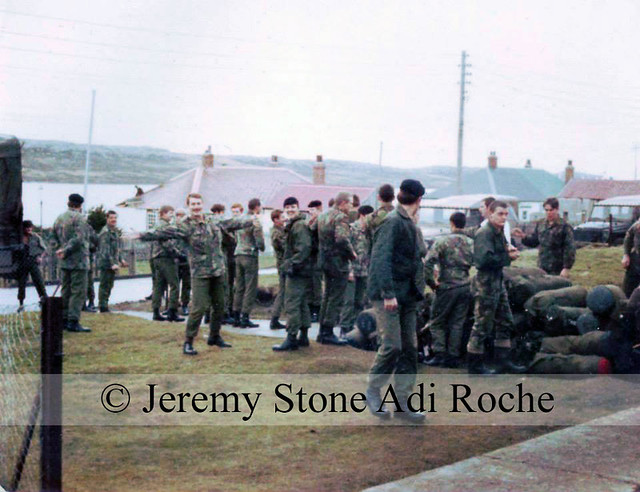 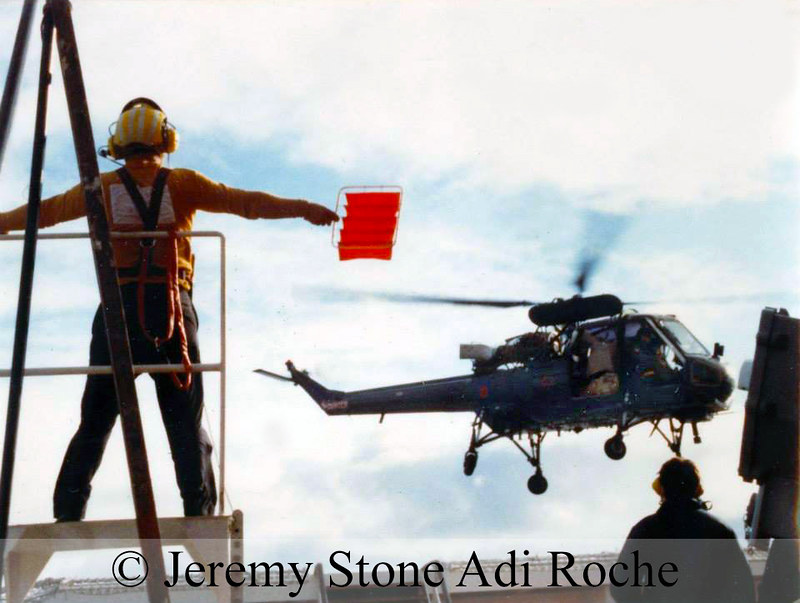 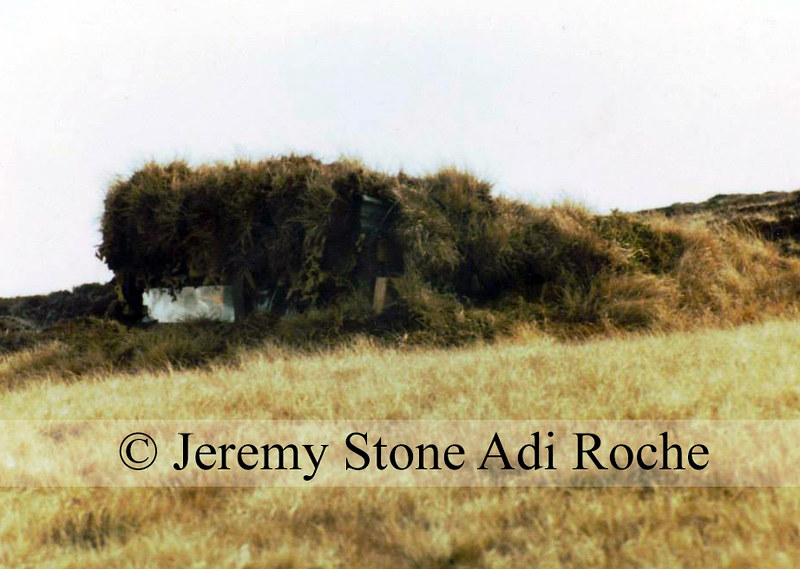 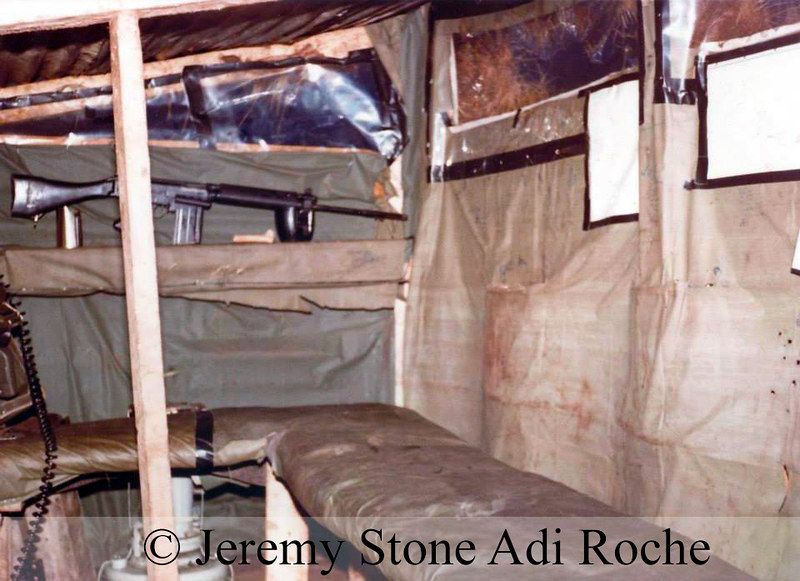 Inside the Sanger, home from home..? 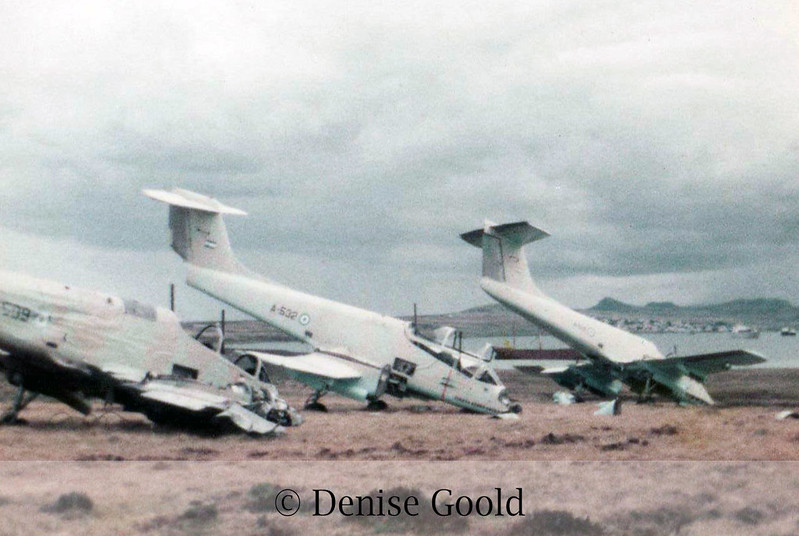 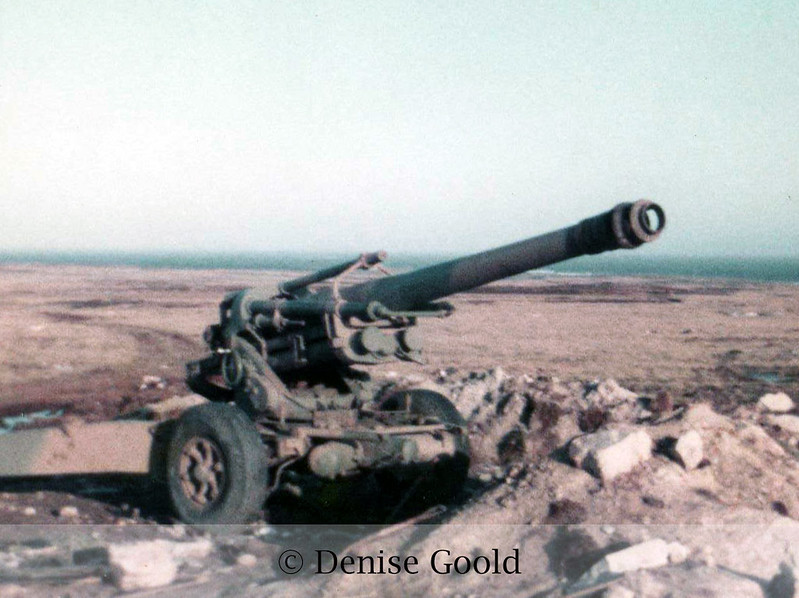 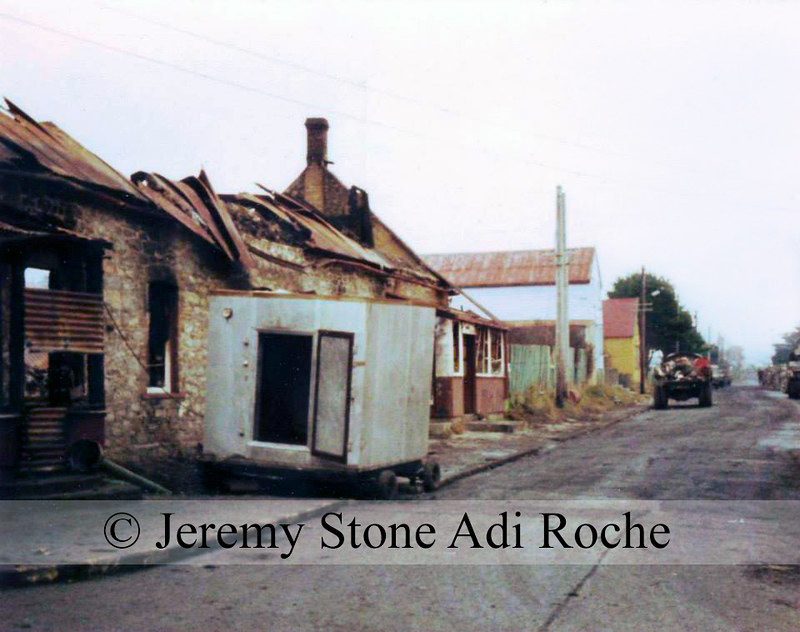 Burned out building was the Argentine Officers detention accommodation, with the FIBS building in the background (yellow coloured)

The photographs above can also be viewed on our Flickr Photos section or if you are an ex-member of 21Bty, 50 Missile, 27 Field Regiment 47 Regiment or currently serving with 21 Bty or 47 Regiment you can join us on Facebook

“I recall a chat with a local who told me that the officers were allowed to carry side arms for their own protection because of the distrust the conscripts had of their officers. The burned out house is where the Argy officers were staying and the conscripts found out, hence the outcome!”

“The mustard coloured building in the background is where the FIBS (Falkland Island Broadcasting Service) radio station is, and was crucial to the campaign.” 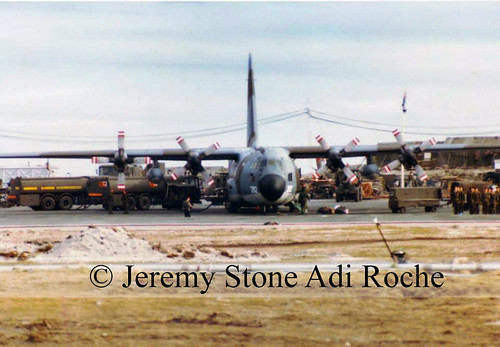 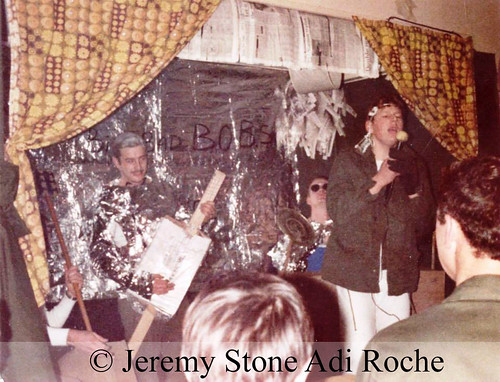 Once the repatriation was complete it was time for the Battery to split, with some returning to Germany and others remaining to provide the air defence coverage. For those that remained, time was split between Stanley and the hills above Ajax Bay in the new sanger at the top of the hill of Ajax, thus allowing better air defence of the area. The plus side was they didn’t need to carry all the kit up the hill every day.

The Bus Fare Home was provided by British Forces Hercules 13 hours to the Ascension Islands, before the final leg back to Brize Norton, with an overnight stop in Lyneham before being shipped back to Gutersloh just in time for the exercise season.

For those that remained time was spent between the hill top sanger and the accommodation in Port Stanley, six months of miserable weather and Penguins for company! As time dragged by the troop commander decided they needed some cheering up, and so the birth, but rather short lived boy band was born, Big Bad Bobs’ Band performing Yesterday by The Beatles and a series of skits were performed, not to mention those dawn raids on other troops that were heading home before them.

A thank you to those that made this page a reality, and as a way of remembering those that are no longer with us we leave you with Big Bad Bobs’ Band and a random selection from the Falklands Gallery.

Please  note the random photos are random, they will change with a page reload, thank you. 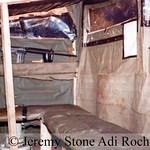 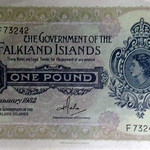 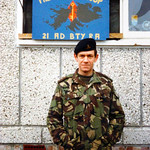 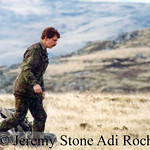 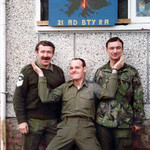 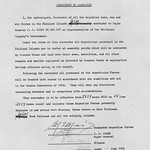 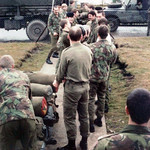 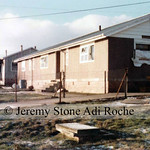 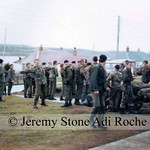 The above videos were uploaded by Tom Elliott, they contain both amateur and professional footage; they are presented here as an overview to the Falklands War as seen from two different perspectives, that being those serving in the military and that of the media presentation of the war to the public. We claim no copyright to the videos and offer them as is, the original copyright remains with the original owners and no infringement is intended and no monies made from the presentation.