the origins of 21 Bty

Philip Webdell began his career in the RA on 18th August 1726 as a Matross. The Battery was formed on 1 Febuary 1758, as P Webdell’s Company at Woolwich, London. For the first eleven years of its existence it served in America, Canada & the West Indies, taking part in the capture of Dominica & Havana.

In addition to his North American Campaigns which saw Webdell ‘s Company in the Battle of Louisburg , Martinique, and Havana, Webdell served as a Captain in the Siege of St Philip in 1756 in Minorca. Webdell was wounded in the battle of St. Augustine, Florida in 1765.

Upon the their return to Woolwich in 1769, Capt Webdell was invalided out of the Battery and assigned to invalid corps, where he served the rest of his long career as a Captain in Portsmouth until 1st January 1771.

Captain Philip Webdell died on the 25th May 1780 in Portsmouth after a 45 year career within the Royal Artillery.

1756 found Philip Webdell serving in Minorca, at the Siege of St Philip’s Castle (fort) 18th April to 28th June 1756 under the command of Cpt Thomas Flight. A French force under the command of the Duke de Richelieu landed on the island and besieged the British garrison at St. Philip’s Castle, forcing them to surrender after a lengthy siege. A British relief force under Admiral John Byng sailed with the purpose of saving the island, but after the naval Battle of Minorca Byng withdrew to Gibraltar, and the resistance of the garrison finally collapsed. Byng was later blamed for the loss of Minorca, and executed by firing squad. One involved in the British navy in this operation was Arthur Phillip, later to be first Governor of New South Wales. The garrison’s resistance had been considered lengthy and honourable enough for them to be allowed to march out carrying their arms and be shipped back home to Britain, a common convention at the time. Blakeney was absolved of any blame for the loss of the island, and was later awarded an Irish peerage in recognition of his defence of Fort St Phillip.

Siege and capture of Fort St. Philip in Minorca in 1756 after the successful landing of the troops of Marshal Richelieu, and the naval victory of La Galissonière against Admiral Byng. 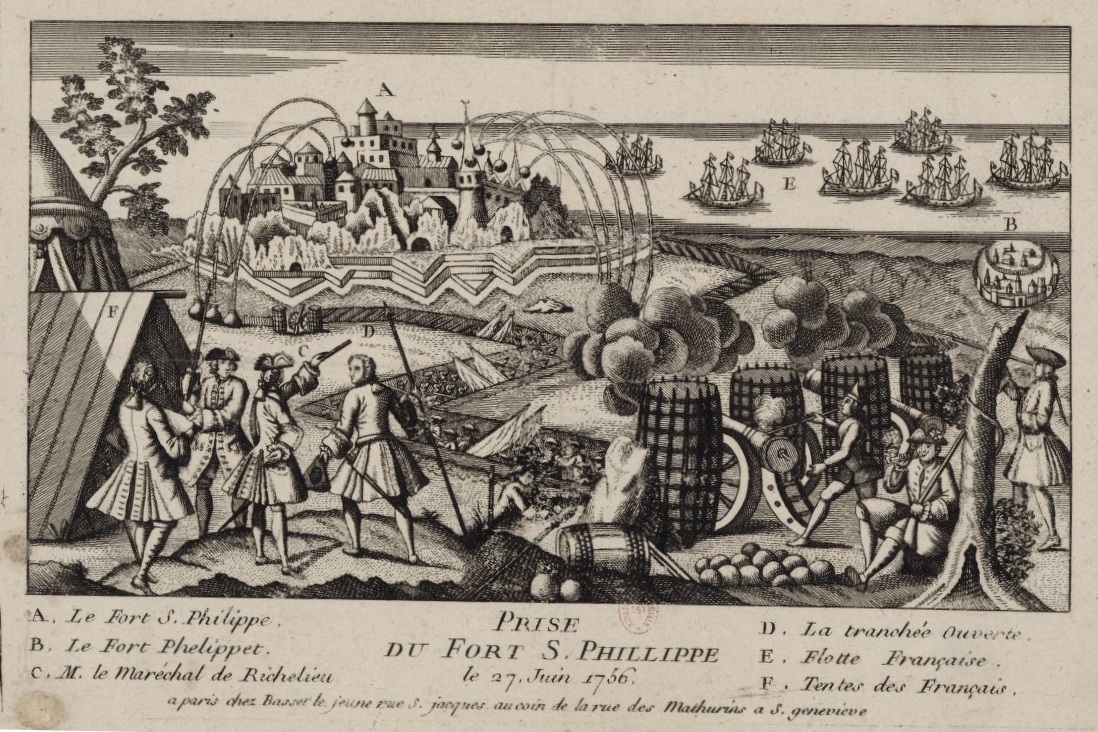 The Siege of Louisbourg was a pivotal battle of the Seven Years’ War (known in the United States as the French and Indian War) in 1758 that ended the French colonial era in Atlantic Canada and led directly to the loss of Quebec in 1759 and the remainder of French North America the following year. Background The British government realized that with the Fortress of Louisbourg under French control, there was no way that the Royal Navy could sail up the St. Lawrence River for an attack on Quebec unmolested. After an expedition against Louisbourg in 1757 led by Lord Loudon was turned back due to a strong French naval deployment, the British under the leadership of William Pitt resolved to try again with new commanders. Pitt assigned the duty of capturing the fortress to Major General Jeffrey Amherst. Amherst’s brigadiers were Charles Lawrence, James Wolfe and Edward Whitmore, and command of naval operations was assigned to Admiral Edward Boscawen. The chief engineer was John Henry Bastide who had been present at the first siege of Louisbourg in 1745 and was chief engineer at Fort St Philip, Minorca, in 1756 when the British had surrendered the fort and the island to the French after a long siege. As they had in 1757, the French planned to defend Louisbourg by a large naval build-up. However, the French fleet sailing from Toulon was blockaded in Cartagena by a British force, and a relief force was defeated at the Battle of Cartagena. After this the French abandoned their attempt to reinforce Louisbourg from the Mediterranean, meaning there would be few ships available to actively oppose the British off Louisbourg.

Order of Battle British forces assembled at Halifax, Nova Scotia where army and navy units spent most of May training together as the massive invasion fleet came together. After a large gathering at the Great Pontack, on 29 May the Royal Navy fleet departed from Halifax for Louisbourg. The fleet consisted of 150 transport ships and 40 men-of-war. Housed in these ships were almost 14,000 soldiers, almost all of whom were regulars (with the exception of four companies of American rangers). The force was divided into three divisions: Red, commanded by James Wolfe, Blue, commanded by Charles Lawrence and White commanded by Edward Whitmore. On 2 June the British force anchored in Gabarus Bay, 3 miles (4.8 km) from Louisbourg. The French commander (and governor of Île Royale) Chevalier de Drucour had at his disposal some 3,500 regulars as well as approximately 3,500 marines and sailors from the French warships in the harbour. However, unlike the previous year, the French navy was unable to assemble in significant numbers, leaving the French squadron at Louisbourg outnumbered five to one by the British fleet. Drucour ordered trenches to be prepared and manned by some 2,000 French troops, along with other defences, such as an artillery battery, at Kennington Cove. Siege Weather conditions in the first week of June made any landing impossible and the British were only able to mount a bombardment of the improvised shore defenses of Gabarus Bay from a frigate. However, conditions improved, and at daybreak on 8 June Amherst launched his assault using a flotilla of large boats, organized in 7 divisions, each commanded by one of his brigadiers. French defenses were initially successful and after heavy losses, Wolfe ordered a retreat. However, at the last minute, a boatload of light infantry in Wolfe’s division (i.e., members of Rogers Rangers) found a rocky inlet protected from French fire and secured a beachhead. Wolfe redirected the rest of his division to follow. Outflanked, the French retreated rapidly back to their fortress. Continuing heavy seas and the difficulty inherent to moving siege equipment over boggy terrain delayed the commencement of the formal siege. In the meantime, Wolfe was sent with 1,220 picked men around the harbour to seize Lighthouse Point, which dominated the harbour entrance. This he did on 12 June. After eleven days, on 19 June, the British artillery batteries were in position and the orders were given to open fire on the French. The British battery consisted of seventy cannons and mortars of all sizes. Within hours, the guns had destroyed walls and damaged several buildings. On 21 July a mortar round from a British gun on Lighthouse Point struck a 74 gun French ship of the line, L’Entreprenant, and set it ablaze. A stiff breeze fanned the fire, and shortly after the L’Entreprenant caught fire, two other French ships had caught fire. L’Entreprenant exploded later in the day, depriving the French of the largest ship in the Louisbourg fleet. The next major blow to French morale came on the evening of 23 July, at 10:00. A British “hot shot” set the King’s Bastion on fire. The King’s Bastion was the fortress headquarters and the largest building in North America in 1758. Its destruction eroded confidence and reduced morale in the French troops and their hopes to lift the British siege. Most historians regard the British actions of 25 July as the “straw that broke the camel’s back”. Using a thick fog as cover, Admiral Boscawen sent a cutting-out party to destroy the French ships in the harbour. The British raiders eliminated the last two French ships of the line, capturing the Bienfaisant and burning the Prudent, thus clearing the way for the Royal Navy to enter the harbour. James Cook, who later became famous as an explorer, took part in this operation and recorded it in his ships log book.

The Story of 13yo William Congreve

Freemasonry
Capt. P. Webdell’s Company, 138 English and other Regimental Lodges : Capt Webdell’s Co. Regiment of Royal Artillery 1773
Capt. Philip Webdell’s Company in the Royal Regiment of Artillery, Constituted at Red Lion, East Street, Portsmouth, Hampshire 1773 Last Register 1781.
Lapsed about 1782. Found by Letter from Mr. B. Roper, Stationer, of Gosport, that Warrant was then vacant, and applied by him to revive it. G. L. Reg.

Reference Slides 7 Year Wars
The Will of Philip Webdell