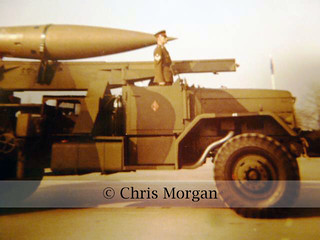 HONEST JOHN was a simple, free-flight rocket capable of delivering a nuclear warhead. This highly mobile system was designed to fire like conventional artillery in battlefield areas. The Basic (M31) HONEST JOHN system was first deployed in 1954. It was replaced by the Improved (M50) HONEST JOHN in 1961 which reduced the system’s weight, shortened its length, and increased its range.

In July 1982, all HONEST JOHN rocket motors, launchers, and related ground equipment items were type classified obsolete. (source) Honest John was the first nuclear-capable surface-to-surface rocket to enter the armouries of the United States and became the backbone of NATO tactical nuclear strike capabilities throughout the 1950s. Honest John was capable of firing a 20 kiloton nuclear warhead at a range of up to 15 miles. Around the same yield as ‘Fat Man’, the bomb dropped on Nagasaki, this was a weapon that could deal out major damage. (source) 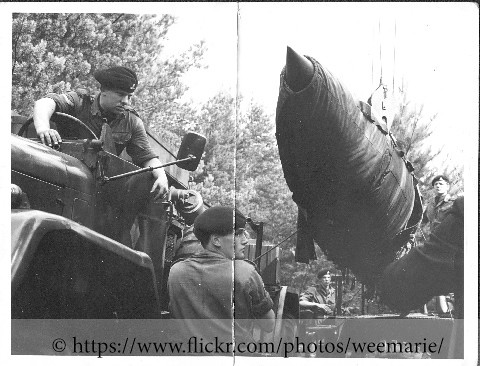 The truck served as both a transporter and a launch platform. The rocket was mounted to a ramp that was raised at the front to the proper aiming elevation. The bottom photo, from Spearhead Newspaper files, shows a live firing of an M50 at Grafenwoehr in 1965. Practice firings were done with weighted dummy warheads, and normally at target distances between 6 and 10 miles.

First developed in the early 1950’s as the model M31, which was the first U.S. tactical (i.e., battlefield or close-support) nuclear weapon. It was a free-flight artillery rocket, as opposed to a guided missile, with a range of 12 miles. The Army in Europe began receiving the improved model M50 in 1962. It also used a solid propellant but had a range of 30 miles, with a ceiling of 30,000 feet, and a speed of Mach 2.3. It was 26 feet long, 30 inches in diameter, and weighed 4,330 pounds. The M50’s nuclear warhead came in three sizes: 10KT, 20KT, and 40KT. It’s high explosive conventional warhead weighed 1,500 lbs. Starting in 1973, the M50 was phased out in Europe and was replaced by the MGM-51 Lance nuclear-armed battlefield missile. (source) (Left Image – A Troop 24 Irish Bty R.A. courtesy of Marie)