Depressing carriages had been invented before – in the 15th century, a German engineer had devised a platform for a culverin that had four wheels and could be moved in two arcs for adjusting the elevation – but Koehler found a simple and effective solution that solved both the problems of elevation and recoil. It was based on an existing garrison carriage, a type of heavy gun carriage mounted on small wheels known as trucks, and the Koehler Gun came into being.

Koehler split the carriage in two horizontally, joining the two parts with a hinge created with a spindle at the front. This allowed the gun to be depressed to an angle of between 20 and 70 degrees. The cannonball and powder were held in place using wadding to secure them in the bore. 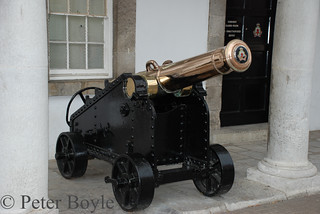 Koehler’s design had the further advantage of absorbing the recoil caused by firing the gun. Ordinary carriages had no mechanism to absorb this recoil. The entire gun and mount would jump violently, causing the gun crew to have to reposition it before they could fire the next shot. Koehler’s carriage mounted the gun on a sliding bed attached to the main body of the carriage via a vertical spindle. Firing the cannon forced the bed to slide upwards, rather than making the entire carriage recoil.

As an eyewitness, John Drinkwater, noted, “the carriage, when the gun was depressed, seldom moved; the gun sliding upon the plank to which it was attached by the spindle, and returning to its former place with the most trifling assistance.” This system was a forerunner of the recoil systems that are standard features of modern artillery pieces. The gun could be reversed on the carriage and fired upwards at angles of up to 45°, though according to Drinkwater “in that state [it] did not particularly excel.” The design also enabled gunners to reload the cannon without exposing themselves to enemy fire, by rotating the sliding bed sideways. (source Wikipedia) 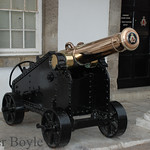