The Ordnance BLC 15 pounder gun (BLC stood for BL Converted) was a modernised version of the obsolete BL 15 pounder 7 cwt gun, incorporating a recoil and recuperator mechanism above the barrel and modified quicker-opening breech. It was developed to provide Territorial Force artillery brigades with a reasonably modern field gun without incurring the expense of equipping them with the modern 18 pounder. It is the gun which writers usually mean by “15 pounder gun” in World War I, but can be confused with the earlier Ordnance QF 15 pounder which fired the same shell, The Honourable Artillery Company used this variations at the battle of Hatum.

Many modifications were made to the old 15 pounder barrels to adapt them to a new carriage with a recoil buffer and recuperator above the barrel similar to the modern 13 pounder design. Previously the barrels had been mounted directly on the carriage by trunnions. Now the barrel was suspended from a forged-steel inverted U-shaped cradle which had trunnions to attach it to the carriage. The trunnions, sight brackets and elevating gear attachment lugs were removed from the barrel. The radial T-vent hole on top was plugged, holes in the jacket passing through the trunnion centres were sealed with screwed steel plugs, and the holes in the hood for fitting tangent sights were plugged with white metal alloy.

The 3-motion breech was replaced by a single-motion interrupted screw breech which had an axial T vent running through it into the chamber, designed to take a T friction tube.

The new firing mechanism involved a new “push” type T friction tube which was inserted into the axial breech vent. The crosspiece of the T was positioned pointing upwards. A long layer’s guard was added to the left side of the cradle projecting behind the breech. A spring-loaded firing handle was built into the layer’s guard. When cocked by pulling back and then released, it sprang forward and struck a firing lever on the breech, which translated the forward motion to a downward motion and propelled a firing plunger into the T of the friction tube which in turn ignited the cordite propellant charge.

In 1915, Territorial batteries guarding the east coast of England adapted their 15 pounders for use against Zeppelins, by simply digging a pit to accommodate the trail of the gun, to allow it to be trained upwards. It is unlikely that this arrangement was ever used operationally.

Mk I 15 3/4 oz Cordite cartridge for BL & BLC 15 pounder field guns, World War I. This cartridge was originally designed for use in the BL 12 pounder 7 cwt gun, and renamed for the 15 pdr. This image shows the pre-WWI version, marked for use with BL and BLC 15 pdrs. Length 11.5 inches, diameter 1.9 inches. Contained 15 3/4 oz Cordite I size 5 and igniter of 2 drams Guncotton yarn at each end.

Diagram of British 15 pounder Mark VI Shrapnel shell, 1914. For use with the following guns :- BL 15 pounder BLC 15 pounder QF 15 pounder Shell length = 9.075 inches, diameter = 2.98 inches, weight filled & fuzed = 14 lb. The shell body was lined with brown paper to prevent the resin matrix from sticking to it. The bullets are contained in a perforated tin cylinder which serves to limit the “angle of opening”, or spread of the bullets after they are ejected from the shell. 230 bullets, 41/lb. The head is attached by brass screws and steel twisting pins. This shell has the old-style 1-inch G.S. fuze socket rather than the modern 2-inch fuze socket. The top of the central tube is threaded for a primer to be installed, which was necessary for use with G.S. fuzes to convey the flash from the fuze down the tube. Shells were painted a lead colour (dirty light grey), instead of the usual black, to distinguish them from 12 pounder shrapnel shells, which were also 3-inch. 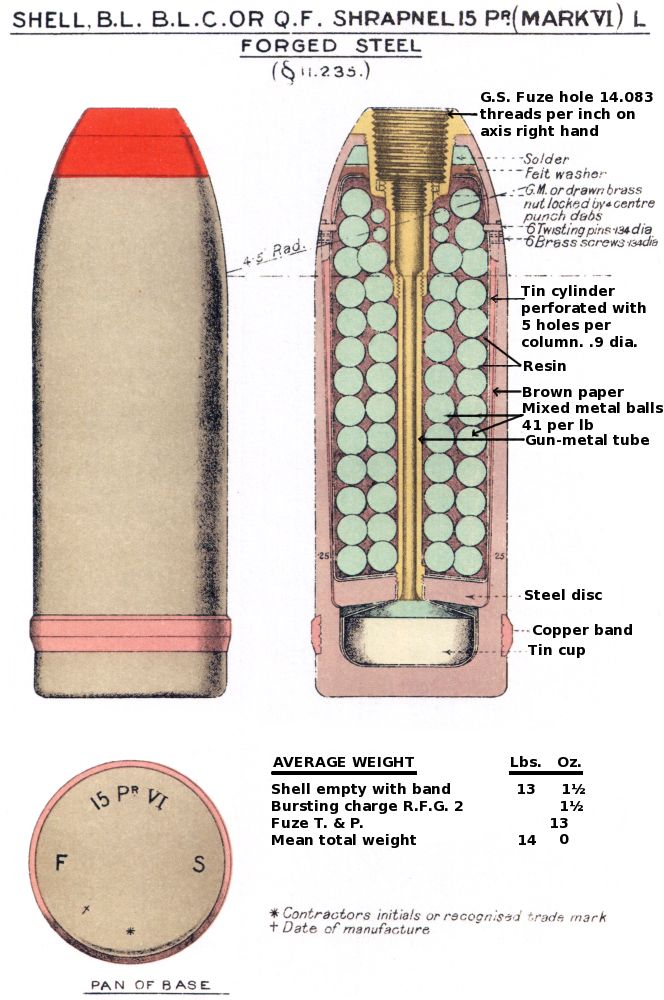 The weapon was used by British Territorial Force and New Army, and Canadian, infantry divisions in all theatres of World War I until replaced by the 18 pounder from 1916 onwards. After they became redundant, from late 1916 some were retained in fixed positions on the Western Front as anti-tank guns, freeing up modern guns for their usual duties.

Number 1 15 Pounder Camel Battery RGA (today’s 21 (Air Assault) Battery) served with 6 guns with the Indian Expeditionary Force in the Aden hinterland from 1915–1918 during the South Arabia campaign, to defend the important port at Aden against any Turkish advance. In July 1915 actions were fought in initially losing and then regaining the British advanced post at Sheik Othman controlling the water supply to Aden. Sgt Curtis was awarded the Distinguished Conduct Medal for saving his gun in these actions (presumably the first, in which 2 guns were lost). The Camel Battery was present when the British captured Hatum in January 1918.

Camel Battery of BLC 15 Pounders after capture of Hatum, 5 January 1918